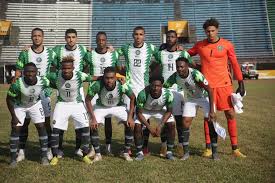 Ordinarily, a battle of any kind including football matches between the ‘Giant of Africa’, Nigeria and her West African neighbours, Benin Republic formerly known as Dahomey, could be termed as “a walkover” because of the political and  economic status of Nigeria as well as abundant sports talents the country can boast of.

In African continent and in the West African sub-region, Nigeria is highly regarded and respected, and rightly so, because of her population of over 200 million people and her natural endowments including oil and gas which have combined to place her among the elite countries of the world.
But sports and football in particular is a leveller hence a less endowed nation can defeat her more illustrious one in a 90 minute game. We have seen it happen time and again across the world.
This is why Super Eagles of Nigeria has a date with history on Saturday, March 27, 2021 when they file out for Match Day 5 of the African Cup of Nations (AFCON) 2020 qualifier tie against host, Squirrels of Benin Republic in Porto Novo.

Already, the Nigerian delegation arrived the host country aboard four chartered Executive Boats which sailed from Lekki Jetty in Lagos state via Badagry to Porto Novo amidst funfare. This is the second time in history Nigerian football team is going for international football engagement thorough the sea. Only Nigeria’s 1949 ‘UK Tourist’ team had travelled by sea from Apapa Wharf to Liverpool in England, United Kingdom. The 2021 team has settled at Golden Tulip de Diplomat in Cotonou from where they will drive to and from Porto Novo, the match venue on Saturday.

On paper, Super Eagles look good to grab all three points at stake on Saturday if the quality of players available to Franco- German Technical Adviser, Gernot Rohr is anything to rely upon. 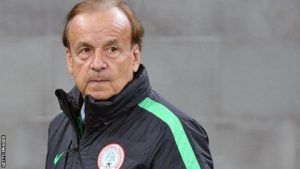 In Eagles camp in Porto Novo are players plying their trade in the top European clubs. They include Leicester City duo of Kelechi Iheanacho aka ‘Senior Man’ and Winifred Ndidi; Everton’s Alexander Iwobi; Victor Osinhen of SS Napoli, Paul Onuachu of Genk; Samuel Chukwueze  of Villarreal and Zeidu Sanusi of FC Porto as well as Scottish Premier League players like Leon Balogun and Joe Ayodele Aribo.

Other foreign-based invitees are goalkeepers Francis Uzoho and Maduka Okoye;  defenders Olaoluwa Aina, William Troost-Ekong, Jamilu Collins, Tyrone Ebuehi and midfielders Oghenekaro Etebor, Abdullahi Shehu, Chidozie Awaziem, Semi Ajayi and attacker Captain Ahmed Musa.
What, with the armada of overseas-based professional players added to three home-based goalkeeper John Noble, forward Anayo Iwuala and defender Adeleke Adekunle in the Nigerian squad in Porto Novo, it will be surprising if Rohr and his boys will not pick up a comfortable win away from home against Benin Republic.
Nigeria, leader of her group with 8 points needs only a draw to qualify should Sierra Leone and Lesotho also draw on Saturday, although it will be nice for the 3-time AFCON Champions beat Benin Republic by whatever margin.

However, Coach of the Squirrels of Benin Republic Monsieur Michel Dussuyer, has stated that his wards will be out to create problems for the Super Eagles in Saturday’s qualifying fixture at the Stade Charles de Gaulle in Porto Novo.

The well travelled French coach has given the indication that his wards will not fear the Super Eagles pedigree, pointing out that his team is poised to throw spanner in the wheel of Nigeria’s progress.
Said he: “It’s a great match, we have respect for this team of Nigeria because it’s a big team in Africa and we know what’s the danger, they have very good strikers and technically they are very strong, so we expect a tough game and we will do our best to create problem to this team and do get a good result.”

Dussuyer who is not new in African football terrain means every word he has said as he is capable of moulding the “average players” in the Benin Republic squad who play in the lower clubs mostly in France into a strong team that will truly pose danger to Super Eagles.

But Rohr and his boys will not have any excuses to fumble in Porto Novo as they are  condemned to beat Benin Republic no matter what happens on and off the pitch.
Soocer-crazy Nigerian fans back  home and abroad will not the Super Eagles to tell them that Benin Republic used “voodoo” on them, for the era of voodoo playing football has gone just as it is expected that the West African neighbours will come up with some pranks on and off the pitch.
Again, these are expected in African football especially when the opponents are Nigeria, one of the most successful football countries in the continent and a strong force in the world having previously won the Olympics Gold medal in football, 5-time Winner of FIFA U-17 World Cup and regular appearances in the FIFA World Cup final since 1994.
This Super Eagles cannot afford to disappoint in Porto Novo as Nigeria is on the March Again  not only to qualify for the next AFCON final in Cameroon but to lift the trophy. This is how to be Super Eagles.
Share on:
WhatsApp
Share on FacebookShare on TwitterShare on Linkedin
2021-03-27
harry awurumibe