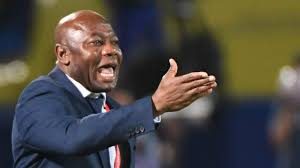 Look at that…Coach Emmanuel Amuneke laughing off talks of being mentioned for Super Eagles Assistant Coach job. He said he is good for the plum position not a sidekick.

Not impressed with the insinuation that he is angling for the  Super Eagles assistant coach job, the former African Footballer of the Year Award winner, Coach Emmanuel Amuneke has stated that such idea has not crossed his mind.

He also laughed off the talks of Super Eagles Technical Adviser, Gernot Rohr preferring to work with erstwhile Chief Coach, Salisu Yusuf to him, pointing out that he  never sort to be an assistant coach to the Franco-German.
Amuneke who is currently heading Al Maqasa Football Club (El Makkasa SC), an Egyptian Premier league team has exclusively told Sportsrevelation
he is not thinking of leaving his current job in Egypt to play a second fiddle to any other coach in Nigeria or elsewhere.
Said he: I categorically deny nursing any ambition to work under any other coach either in Nigeria or elsewhere with my pedigree in the game. I did not apply to work as Rohr’s assistant and nobody has also approached me about it”.
Speaking further from his base in Egypt he said he has no intention to leave his current job in Egypt for a lesser job in Nigeria.
According to him, “Why should I be an assistant coach to anyone with my pedigree in the game. With what I have done in the industry either as a player or coach, I should be going higher than working under another coach”.
Amuneke who also led the Golden Eaglets to win the FIFA U-17 World Cup as Head Coach and had been Chief Coach of the U-20 Flying Eagles as well as Super Eagles Assistant Coach in 2016 argued that he has what it takes to lead the Super Eagles in 2020 and beyond”.
The former Nigerian international who played club football for FC Barcelona, Spain; Sporting Lisbon, Portugal and Zamalek SC, Egypt as well as clubs in Asia and Nigeria insisted that he would rather continue where he is currently working than take up an assistant coach job in Nigeria.
The member of FIFA and CAF Technical Study Group (TSG) who also possesses UEFA Masters and UEFA 1-3, Certificates said he will rather wait for his time to be the Technical Adviser/ Head Coach of Super Eagles, adding that “my philosophy has been there is no hurry in life, when the time comes I will get the chance to showcase my prowess”.
Share on:
WhatsApp
Share on FacebookShare on TwitterShare on Linkedin
2020-11-28
harry awurumibe