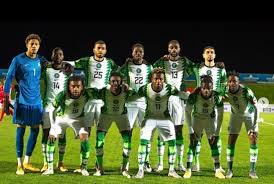 Not Yet Uhuru…Super Eagles are far from qualifying for Cameroon 2022. But Nigeria can stun Sierra Leone on Tuesday when the three-time African Champions play the host in Freetown.

More nations have booked their tickets to the next African Cup of Nations (AFCON) billed for Cameroon in 2022 with the defending champions, Algeria being the latest country to qualify for the continental showpiece.

Algeria qualified on Monday despite dropping a two goal lead to draw 2-2 with Zimbabwe away in Harare.
Forward Knowledge Musona and Prince Dube scored as Zimbabwe mustered the turnaround to revive their hopes of qualification.
The result sees Algeria move to 10 points while Zimbabwe remain second with five with two rounds of matches remaining just as in the other group match, Botswana beat Zambia 1-0 at home, a result that will leave a tight ending for the single remaining slot from Group H.
Andy Delort and Riyad Mahrez had given the Desert Foxes the lead, but the home side pushed in for a fight to earn a point that took them to five in Group H, with Algeria seeing their chance of concluding their qualification business after match day four halted.
Nonetheless, the North Africans stretched their unbeaten record to 22 games and moved to 10 points on top of the standings.
The reigning African champions opted for a reserved approach start to the game, with Zimbabwe chasing more as they knew only victory would take their campaign back on track.
Despite playing with their backs on the wall, Algeria still had their chances. Sofiane Feghouli had a chance when he picked up the ball from inside the box, but his shot was over.
Mahrez had three chances from freekicks, his first after eight minutes brushing the side netting after beautifully curling beyond the ball. In the 20th minute, he made a good delivery from the right, but the ball went just wide at the back post.
He had another one two minutes later from good scoring range, but he blasted the ball over.
Zimbabwe were good on the ball, and sprayed the ball upfront, but couldn’t make the chances count.
They were made to pay after 33 minutes when Delort thumped in a powerful header behind the keeper after sneaking in behind the defense to connect to a Mohammed Reda cross from the right.
Four minutes later, the Desert Foxes were 2-0 up when Mahrez finally got his goal, expertly picking up a long cross from midfield before dummying past his marker and thumping the ball into the net with his weaker right foot.
Two minutes from halftime though, the home side halved the deficit with skipper Musona curling a brilliant freekick that beat keeper Rais Mbolhi with a sweet curl that landed it on the far post.
Musona had scored just a minute after another freekick of his was pushed onto the crossbar by Mbolhi.
The goal gave Zimbabwe some belief and they came back from the break a different side, going into attack from the first minute. Tino Kadewere came close twice, first being denied by a point blank save by the keeper before his shot from inside the box rolled just wide.
They kept their pressure and drew level with nine minutes left, when Mbohli fumbled as he tried to save Dube’s effort after side footing when Musona’s corner was flicked to the far post.
Scenting victory, the Zimbabweans piled pressure, but were unlucky not to score.
Meanwhile in Gaborone, Mosha Gaolaolwe scored the solo goal as Botswana beat Zambia by a solitary goal to pick their first win of the qualifiers and move to third in Group H.
Gaolaolwe scored in the sixth minute, a lead that The Zebras jealously guarded to revive their hopes of qualification.
The three points picked at home after one draw and two losses sees them go to four points, one behind second placed Zimbabwe with two rounds of matches left.
They will welcome Zimbabwe at home before flying out to Algeria for their final two qualifiers and the result against Zimbabwe is now billed as a final.
Zambia have dropped bottom with three points and their final two matches at home against Algeria and away to Botswana will determine their fate.
In another development, Liverpool’s of England’s talismanic forward, Sadio Mane scored to help Senegal beat Guinea Bissau to become the first African country to pick the ticket for the African football fiesta next year in Cameroon.
Nigeria will take on Sierra Leone in the reverse fixture Tuesday at Siaka Stevens Stadium in Freetown after the Super Eagles threw away a 4-1 lead at half time last Friday at Samuel Ogbemudia Stadium in Benin City to draw 4-4 with lowly Sierra Leone.
Share on:
WhatsApp
Share on FacebookShare on TwitterShare on Linkedin
2020-11-16
harry awurumibe