Angered by the not- too impressive performances of the Super Eagles in the two recent international friendly matches in Austria against Algeria and Tunisia in Austria during the October FIFA break, many Nigerian fans have called for the end of the rebuilding process embarked by Head Coach Gernort Rohr.

Also, football fans have criticised the dark green colour of the new Nike jerseys which the Super Eagles wore in the 1-0 loss to Algeria last Friday in Austria.
The team put on a brighter white and green attire in the 1-1 draw second match against Tunisia.
But commenting on the two matches, Sir Japhet Onwuchuruba gave Super Eagles thumbs down, saying that they played below his expectations and that of many Nigerians in the two games.
The Finance/ Accounts expert with Federal Inland Revenue Services (FIRS) who is an
ardent supporter of the Nigeria’s national teams is not impressed with the display of the Super Eagles in the two matches played in Austria.
According to him, “the Super Eagles’ display in the two matches in Austria are at best below average, they played uncoordinated games as far as I am concerned”.
Onwuchuruba argued that Super Eagles have onceo again failed to show quality in the face of stiff opponents, pointing out that the two North African teams they faced in Austria troubled the Nigerian team badly.
Another passionate  football fan, Sadiq Ismaila frowned at the lackadaisical attitude of Super Eagles players especially in the first match against Algeria.
Ismaila, a Business man at Wuse Main Market, Abuja accused the Nigerian team as lacking in tactics hence the Algerians triumphed again over them in Austria.
Said he, “the Super Eagles are too predictable that any serious team will always beat them. I am convinced that the problem of the team is in lack of self believe”.
However, Port Harcourt- based  Petroleum Engineer,
Elder Jerry Egwuekwe heaped the problems of Super Eagles especially lack of technical depth on the Franco-German Technical Adviser, Rohr.
” I was one of the admirers of Coach Gernort Rohr but it is becoming clear that he still don’t have a team after four years on the job. He sold us the theory of “rebuilding” the Super Eagles and I am sorry I don’t buy it again”, Egwuekwe said.
He therefore called on the Nigeria Football Federation (NFF) to as a matter of urgency direct Rohr to end the rebuilding process and give Nigerians a standing national team.
Egwuekwe who is a former Academical player argued that  Rohr cannot in good conscience tell Nigerians that he cannot give Nigeria her first 11 from the hundreds of players he had invited to the senior national team since his four years stint.
Meanwhile, Nigeria football fans have criticised the dark green colour new Nike jerseys which the Super Eagles wore in the 1-0 loss to Algeria last Friday in Austria. 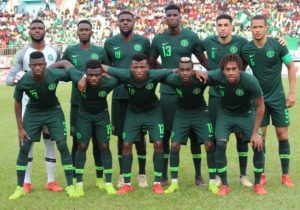 According to him, “the Super Eagles are no longer wearing the internationally recognised Nigerian colour of light Green and White. I nearly argued with my friends last Friday while watching the Nigeria versus Algeria tie in Austria that the team in very dark green outfits was Super Eagles”.
Also, Mr. Olugbenga Adeleye aka ‘Super’ has  criticised the dark green outfits, saying that it’s a not.the Nigerian bright green colour which is recognised around the world.
The Lagos- based printing expert has therefore called on the authorities to revert to the Nigeria national colours of smart Green and White instead of the new Nike dark Green and Black  jerseys.
Share on:
WhatsApp
Share on FacebookShare on TwitterShare on Linkedin
2020-10-14
harry awurumibe