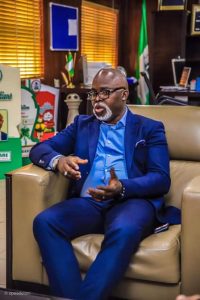 Determined to reposition the domestic women’s football league, the

Nigeria Football Federation (NFF) recently posted an experienced staff, Mrs. Faith Ben-Anuge to the Nigerian Women  League (NWFL) as the Chief Operating Officer (COO).
And she has said that her first task is to reorganize the NWFL secretariat to be in tandem with the new vision of making the women’s football league to be at par with what obtains abroad.
The new COO (Faith Ben–Anuge) who replaced Dr. Ayo AbdulRahman who himself was posted to handle the AITEO Cup Division at the NFF Headquarters, argued she  is optimistic in raising the standard of women’s football  league with her long experience on the job.
According to her, “as the new COO I believe my passion of administering  women’s football to the highest level is not in doubt, at all.
I will try my best to bring women’s league into a new era as obtainable in global football adminstration”.
Speaking further Mrs. Ben-Anuge stated that: “I am at home with the league because I have been there before and now my corporation and support of the Aisha Falode led NWFL Board we shall all see a better women’s league not only in Africa but in the world for a better enviable results.
She added that, “togather we will focus on making our league great again and strengthen our grass roots development and integrate feeder teams into the system go forward”.
The new COO is a seasoned football administrator as she once headed the Women Football Development Department which comprises the women’s league and Women’s Competitions from 2006 to February 2008.
She was later seconded as the Falconent Team Administator from 2008 to 2014 with a second placed finish twice at the FIFA U-20 Women’s World Cup in Germany 2010 and Canada 2014 just as she also had a short spell as the Super Falcons Team Secretary to the 2016 African Women’s Cup of Nations (AWCON) in Cameroon which Super Falcons won and got a Gold medal with the team.
The NWFL Chief has since assumed  office at the new league sectariat at the former NFF Head Office (Glass house) at plot 2033 Olusegun Obasanjo way , Wuse Zone 7, Abuja.
Share on:
WhatsApp
Share on FacebookShare on TwitterShare on Linkedin
2020-08-28
harry awurumibe