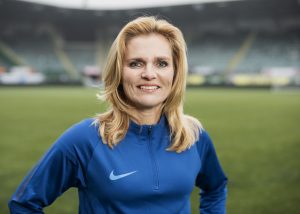 With Nigeria set to announce a new Technical Adviser for the national senior women’s football team, Super Falcons, Sarina Wiegman, Head Coach of the Netherlands has been confirmed as Phil Neville’s successor as England Head Coach.

But the Netherlands current boss will only take charge in September 2021. Wiegman led the Dutch to a European title and the FIFA Women’s World Cup Final in France in 2019.

Wiegman who will be the next Head Coach of England’s women’s national team, Three Lionesses was confirmed by the Football Association late Thursday and made public on Friday, August 14, 2020..

The Netherlands coach, who was named The Best FIFA Women’s Coach in 2017 after leading the Dutch to the UEFA Women’s EURO title on home soil, will take charge as Phil Neville’s successor in September 2021.

Wiegman’s first major tournament with the Lionesses will be another home Women’s EURO, although first she will lead the Netherlands into the Women’s Olympic Football Tournament in Tokyo.

She said: “I’m delighted and honoured to join England Women next year. England is the cradle of football and the major developments in women’s football globally over recent years have been led by The FA. I’m very much looking forward to contributing my experience and expertise to this ambitious team.

“The ride with the ‘Oranje Lionesses’ has been amazing so far, but we haven’t reached our final destination yet. There are two more goals: qualifying for the UEFA Women’s EURO in 2022 and challenging at the Olympics next summer. That would be a fitting completion for me of everything we’ve strived to achieve in women’s football in my home country.”

Neville, meanwhile, will continue as England coach until July 2021, with a decision yet to be taken on who will coach Team GB at next year’s Olympics.

The FA’s chief executive, Mark Bullingham, who will be involved in those talks, said of Wiegman’s appointment: “We are thrilled to have secured Sarina to lead the Lionesses until 2025. She was the outstanding candidate from a very strong field.

“Having won a home EURO in 2017 and leading the Netherlands to the final of the FIFA Women’s World Cup last year, she is a proven winner and we are confident she can take England to the next level, giving us the best possible opportunity of achieving our ambition to win a major tournament.“

The FA’s director of women’s football, Sue Campbell added: “It speaks volumes for the progress of England Women over recent years and the bold ambitions we have for the future that we had so many world-class candidates apply for the role.

“Sarina was our number-one choice. She is the perfect cultural fit for us, which is crucially important in building a winning team. Her technical expertise, leadership skills and winning mentality is hugely impressive.

“I am confident that together with our incredible support staff and ambitious, talented playing squad she can help us achieve the international success we are striving for.”