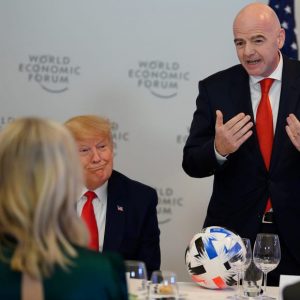 FIFA Tournaments and Events Officer,
Colin Smith, has revealed that as the next key step in the selection process for the host cities for the FIFA World Cup 2026, the federation will in the coming weeks organise individual meetings with all candidate host cities.
But he stated categorically that in line with FIFA’s policy to follow the recommendations of the health authorities in the context of the COVID-19 pandemic, visits to all cities will take place whenever it is safe to do so, enabling the FIFA administration to then submit a proposal to the FIFA Council, which is set to appoint the FIFA World Cup 2026 host cities in 2021.
These are the direct outcome of the just concluded FIFA World Cup 2026 Candidate Host City Virtual  Workshop held in the United States of America (USA) on Tuesday.
Representatives from the following 23 candidate host cities attended the workshop.
The FIFA World Cup 2026, which will be the first to feature 48 teams and 80 matches, moved a step closer Tuesday, July 7, 2020 as FIFA completed a series of three workshops with the host associations and their respective candidate host cities.
Confirming the high level of interest sparked by the FIFA World Cup across the three host nations, Tuesday’s interactive online workshop gathered all 17 candidate host cities from the USA and followed on from meetings with all Mexican and Canadian candidate host cities held earlier this year in Mexico City and Toronto, respectively.
Representatives from 23 Candidate Host Cities who attended the workshops are:
*Canada: Edmonton, Montreal, Toronto
*Mexico: Guadalajara, Mexico City, Monterrey
*USA: Atlanta, Baltimore, Boston, Cincinnati, Dallas, Denver, Houston, Kansas City, Los Angeles, Miami, Nashville, New York/New Jersey, Orlando, Philadelphia, San Francisco Bay Area, Seattle and Washington DC.
During these sessions, FIFA provided an overview of the venue selection process while outlining the focus areas for the assessment of candidate host cities and addressing the rules and procedures relating to the venue selection process.
“Through our exchanges with the three host associations and the candidate host cities, we have sensed a great commitment and enthusiasm to offer the whole world a unique experience inside and outside of the stadiums. The FIFA World Cup 2026 will not only go down in history for being the first to include 48 teams, but also because of its impact on football development as a whole in line with FIFA’s objective of making our sport truly global,” said Colin Smith, FIFA Chief Tournaments & Events Officer.
“While stadiums remain the foundation for the successful hosting of a FIFA World Cup, it’s absolutely paramount to ensure the best possible solutions in relation to key infrastructure as well as sustainability, human rights and event legacy. We look forward to a highly competitive selection process over the next months”, Smith said
Meanwhile,
Dan Flynn, the former U.S. Soccer CEO who is overseeing the USA City Selection Process, said:
“One of the many strengths of our unified bid to bring the FIFA World Cup 2026 to Canada, Mexico and the United States was the wealth of world-class cities and venues that would make spectacular hosts, and that is especially true here in the United States with 17 cities that offer everything you’d want and need to stage the first 48-nation FIFA World Cup in history.
“Determining the cities that will ultimately play host to matches in the USA will not be easy, but we welcome the process and it began Tuesday with our workshop. I am confident that everyone is ready to get started”, he concluded.
On his own, Peter Montopoli, Canada Soccer General Secretary, said:
“We look forward to welcoming the world in 2026 when Canada, Mexico and the United States host the FIFA World Cup. The Candidate Host City Workshop provided our Canadian cities with the chance to both learn and share the opportunities that a FIFA World Cup will deliver to our nation for the biggest sporting event in the world.”
Also, Mauricio Culebro, Mexican FA Operations Director, said:
“This first workshop on the road to the World Cup 2026 is cause for celebration. It is a badge of pride for Mexico to get to stage this great event, which we know will be an inspiration and a driver of social transformation. As well as being hugely gratifying, hosting the World Cup is a big responsibility, which is why we are already hard at work.
“We are going to welcome the rest of the world and we are striving, hand in hand with Canada and the USA, to organise the best World Cup ever”, he stated.
Simultaneously, FIFA had on Tuesday launched a dedicated section for the tournament in 2026. Besides profiles of the three host countries and their Candidate Host Cities, the new section features information about the tournament in four languages.
Share on:
WhatsApp
Share on FacebookShare on TwitterShare on Linkedin
2020-07-08
harry awurumibe