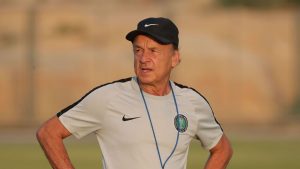 Apparently to beat the deadline of the expiration of the first contract of the Super Eagles Technical Adviser,  Gernot Rohr,  the Executive Committee of Nigeria Football Federation (NFF) has mandated the General Secretary, Dr. Mohammed Sanusi to liaise with the Franco German with a view to concluding all matters around Mr. Rohr’s new contract within the next one week.

This was part of the decisions taken by the NFF Executive Committee at its video conference meeting held on Thursday,  May 14 but which its communique was released on Monday,  May 18. 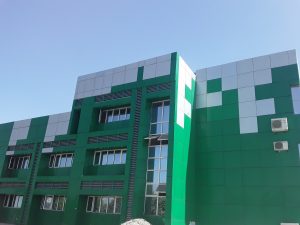 COMMUNIQUE OF THE MEETING OF NFF EXECUTIVE COMMITTEE HELD VIA VIDEO CONFERENCING ON THURSDAY, 14TH MAY 2020

The Executive Committee of Nigeria Football Federation met via video conferencing on Thursday, 14th May 2020 to deliberate on important issues in Nigerian Football and resolved as follows:

1.         The Executive Committee once more, commended the proactive and comprehensive policies, strategies and measures instituted by the Federal Government to definitively tackle the coronavirus pandemic (COVID-19) that has left pain and sorrow in most nations of the world in the past couple of months. Members equally praised the Federal Ministry of Health, Nigeria Centre for Disease Control, all first responders and all other public health workers in the frontline for their efforts in reducing community transmission and saving lives.

2.         The Board acknowledged the advice of world football –governing body, FIFA on how the $500,000 (Five Hundred Thousand American Dollars) relief fund sent to the NFF (as also provided for other Member Associations of FIFA), among other FIFA monies available to the NFF, should be spent. Board directed the Secretariat to immediately set machinery in motion to ensure the fund is utilized to the letter as advised by FIFA. The core areas approved for the utilization in line with the FIFA Forward 2.0 Program include but not limited to Management and Staff salaries, men’s league, women’s league, referees’ development training, National Teams (including boys and girls’ youth teams), office operations, renovations and furnishing of Bauchi NFF/FIFA Technical Centre.

3.        Still on COVID-19-related measures and palliatives, the Board praised its Members as well as Management and Secretariat staff who were involved in the distribution of palliatives (in the form of food items) to Clubs and communities in Abuja, and the distribution of protective overalls, face masks, latex hand gloves and sanitizers in Lagos and Kano States, and the Federal Capital Territory. Members reiterated that it was a commendable move by the Federation to support the efforts of the Federal Government in combating the COVID-19 menace.

4.        The Committee received briefings from NFF external auditors, PricewaterhouseCoopers (PwC) – who were part of the meeting for over an hour – on the concluded NFF audit and approved for immediate implementation, new strategies and methods to strengthen governance, accounting controls and financial reporting of the Federation. The new methods and measures are meant to ensure even greater conformity with governance and accounting principles and formats of modern corporations and business entities, with periodic assessment of functionality.

5.         The Executive Committee endorsed the re-jigging of the terms of reference and objectives of the NFF Foundation, which was set up in July 2019. The Foundation, headed by Mr. Mohammed Edewor (who was also part of the meeting for more than 30 minutes), will now add to its original mandate of raising funds for empowerment initiatives for ex-internationals by way of training and skill development; football community and social change programmes; grassroots development programmes and; football-for the girl-child and women football empowerment programmes. Mr. Edewor availed the committee of ongoing efforts at raising funds to kickstart the work of the Foundation, some of which has already met with success.

6.         Committee received  an interim report of the NFF team led by its President to recent meetings with the Federation’s Partners and Sponsors. Consultations are ongoing and the NFF President is expected to brief the Board on further developments at its next meeting.

7.         The Board mandated its Football Committee to liaise with the heads of the various Leagues (Nigeria Professional Football League; Nigeria National League; Nigeria Women Football League and; Nigeria Nation-wide League One) and other important stakeholders on the return of the domestic football season, subject to announcement by the Federal Government on resumption of football and other sporting activities in the country.

8.         The Executive Committee mandated the General Secretary to liaise with the Super Eagles’ Technical Adviser, Mr. Gernot Rohr with a view to concluding all matters around Mr. Rohr’s new contract within the next one week.