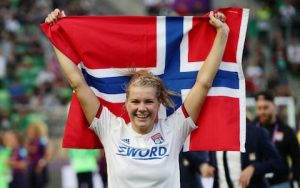 Money Woman…Ada Hegerberg of Olympique Lyonnais/Norway Salary: €360,000 per month and net worth of $117 million

With a United States (US) court throwing out the case filed by the US National Women’s Team asking for Equal Pay with their male counterpart, the dreams of many female players to be valued the same with the male players may not see the light of the day.

Sportsrevelation can exclusively report that even the Ballon d’Or winner, Ada Hegerberg is at the top of the list of highest-paid female football players of 2019/2020, but she still earns 326 times less than the best paid male player.
Women’s football may be taking enormous strides in terms of popularity and finances, but even the highest-paid female footballers are far behind their male counterparts in terms of salaries.
Comparing the top ten highest-paid women footballers in the world with male footballers and managers, it was found that there still remains a large pay gap between the two set of players.
Ada Hederberg, the holder of the Women’s Ballon d’Or, tops the list of the highest-paid female football players of 2019 with an annual income of around £343,000.
But in contrast, Lionel Messi, current Ballon d’Or holder and the highest-paid men’s footballer in the world, gets around £112 million a year, exactly 326 times what Hegerberg is paid.
Here are the list of top highest-paid female soccer players of 2019/2020 along with their annual income even as no Nigerian female footballer at home or abroad earns a fraction of the least of overseas players receive in their clubs.
1. Ada Hegerberg / Norway
Salary: €360,000
Ada Hegerberg, born on the 10th of July 1995, is a Norwegian professional footballer who plays as a striker for the Division 1 Féminine club Olympique Lyonnais.
She has previously played for Kolbotn and Stabæk in Toppserien. The 24-year-old Ballon d’Or Féminin award winner, Ada Martine Stolsmo Hegerberg, is originally from Molde, Norway.
The skilled professional female footballer who is 1.76m tall wears the No. 14 jersey and earns a wage of €360,000, which is still 326 times less than the best paid male player, Lionel Messi.
It seems that female football fans still need to chant “Equal pay! Equal pay!” as they did at the World Cup in France.
*Net worth
According to Forbes, the famous soccer player Ada Hegerberg’s net worth is $117 Million.
Watch out for the second highest paid female footballer in this series.
Share on:
WhatsApp
Share on FacebookShare on TwitterShare on Linkedin
2020-05-16
harry awurumibe