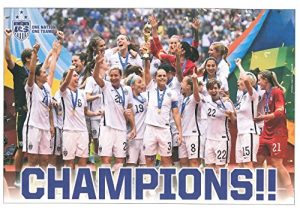 USA on the march again. ..Two-time Olympics Champions Team USA will on Friday qualify for the summer Olympics Games

The United States Women’s National Team (USWNT) and reigning FIFA Women’sWorld Cup Champions could be just 90 minutes away from qualifying for the 2020 Summer Olympic Games in Tokyo.

The stars-ladden team will on Friday, February 7 at the on-going 2020 CONCACAF Women’s Olympic qualifying championship battle Mexico in the second semi final match which will see the winner pick one of the confederation’s tickets for the Women’s Football competition at the Olympics. Canada will tackle Costa Rica in the first semi final tie on the day.

Two days ago, USA 2020 CONCACAF Women’s Olympic qualifying championship journey continued with a 6-0 thrashing of Costa Rica to clinch Group A with a perfect three win record even as in those three games, the USA scored 18 goals and didn’t concede once, setting up a battle on Friday against Mexico for a spot in the Olympics.

Last Monday’s match for the Americans was a cakewalk, and the winning goal came just two minutes in when Christen Press pulled off a fantastic touch before going far post to the upper 90 on the Costa Rica goalkeeper.

Press finished the game with two goals, as did Samantha Mewis, while Lindsey Horan and Jessica McDonald also scored. The USA scored three goals in each half and out-shot Costa Rica 24-1.

The team’s game on Friday for an Olympic berth is set for 10 p.m.(ET) from Carson, California, USA.