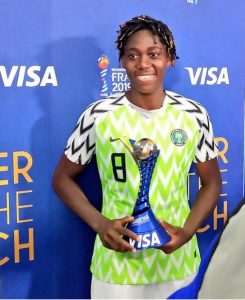 Winner Girl…Assist Oshoala with her Woman of the Match Trophy in the Nigeria vs South Korea tie at last summer’s FIFA Women World Cup final in France. She scored in the match.

Hope rises for a Nigerian player to return home next year with the  Confederation of African Football (CAF) Best Player Award as three Nigerian players have made the final list of the three nominees in their categories.