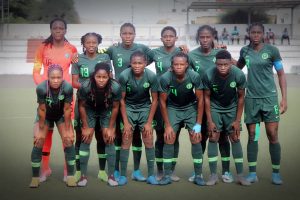 Super Falcons in a group photograph before the match. They failed to soar higher in Lagos.

Nigeria this evening failed to qualify for the next round of the women’s football tournament of the Tokyo 2020 Olympics African qualifiers after playing out a gruelling1-1 scores against Cote d Ivoire in Lagos.

The draw was not however good enough to see Nigeria through to the fourth round of the qualifying campaign as the Ivoiriens advanced on an away goal rule. Both countries had played a barren draw in the first leg tie in Abidjan last Thursday.

A moment of lack of concentration in the early minutes of the game by Nigeria’s Super Falcons first choice goalkeeper, Chiamaka Nnadozie saw a 20- yards free kick by Ivoiren’s Nina Kpaho sail into the top post for the benefit of the Ivoiriens.

The visitors’ goal which came in a most unexpected manner in the 12th minutes of the Match unsettled the Nigerians.

But the Super Falcons did not lose steam, and in the 27th minute, skipper Asisat Oshoala should have equalized but watched her shot from a brilliant Gift Monday pass go over the bar.

However, Nigeria drew level seven minutes later. From a counter attack, midfielder Ngozi Okobi-Okeoghene put Oshoala through with an intelligent pass, and the captain kept her cool to steer the ball past the big Djohore to equalize the match in the 34th minute.

The visitors would have scored another goal afterwards but Nnadozie was now more alert. The Nigerians from that moment lost their bearing till end of the first half.

The breakthrough,however, could not come there way despite efforts by the Falcons to find the second goal to qualify for the next round as the winning goal proved abortive until the match officials from Ghana ended the match after just three minutes of the added time inspite all the unnecessary delays by the visitors’ players throughout the match.

Meanwhile, a melodrama occurred after the final whistle as the match officials from Ghana were confused whether to go into the extra time, penalty kicks or declare the match over.

The four officials lined up at the edge of the field waiting for directives from the Match Commissioner from Liberia. After making several calls to unknown persons, she signalled to the referees to exit the pitch.

While the drama lasted the Nigerian players watched with hands akimbo as the Ivoirens bursted into wide celebrations.